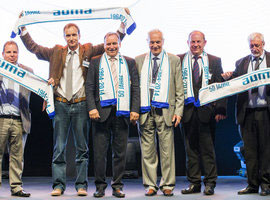 Actuator manufacturer AUMA marked its 50th anniversary with a three day event at its company headquarters in Muellheim, Germany. Hosting more than 7,000 guests including suppliers, co-workers and their families, AUMA’s 27,000 square metre site was transformed to showcase the company’s expertise and global success in modular electric actuation. The programme included production tours, tutorials, exhibitions and entertainment.

Founded in 1964 as a two-man partnership, AUMA has expanded to a worldwide group employing more than 2,300 people. A pioneering spirit anticipating the market’s requirements and an early international focus ensured the family-run company evolved to a technological leader for the electric actuator market.

Commenting on the company’s success, and growth, Matthias Dinse, Commercial Managing Director said:
”Over AUMA’s 50 years we have created a firm foundation for the organisation based on a strong engineering-led ethos. Innovative R&D and a dedicated workforce will ensure future development. We have a strong international presence, which we are continuing to evolve to ensure our quality modular actuators and services are available across the globe.

As the world’s population continues to grow, requiring water and energy, we are confident of AUMA’s continued expansion: our actuators support growth in demand for automation contributing to more efficient and economical services.”

At the anniversary event, Werner Riester, one of the two company founders, explained in a moving speech the initial challenges that had been faced by AUMA and the highlights of the company’s success during the last 50 years. He expressed his grief at the loss of the second company founder, Rudolf Dinse, who passed away just a few weeks before the anniversary at the age of 83. Important representatives of the political and economic community paid tribute to AUMA including Klaus Endress, former CEO of Endress+Hauser Group and current President of the Supervisory Board. Muellheim’s Mayor, Ms Astrid Siemes-Knoblich also endorsed AUMA’s success.

All 1,350 members of staff from AUMA’s German sites along with subsidiary companies GFC, SIPOS Aktorik, Haselhofer and DREHMO were invited to participate in the celebrations. Delegations from more than 70 foreign AUMA sales and representative offices also joined the event. A ‘Discover AUMA’ day concluded the programme when friends and relatives shared the anniversary experience. 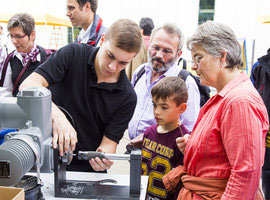